The 100 block of Pike functions as an entry to the Market and to the waterfront beyond, and as a gathering space that supports retail frontages. The new design will feature a curbless street, prioritizing pedestrians and allowing for scheduled events and gatherings, new paving, new trees and plantings, a single travel lane for local access, tactile wayfinding bands for the sight impaired, and more visible and accessible crosswalks.
The new design of the 300 block of Pine provides a more pleasant pedestrian experience. The design features a protected bike lane, an expanded sidewalk on the south side of the street, additional trees and new ground plantings, loading and unloading space for passengers and trucks, and a signature crosswalk at 3rd and Pine. 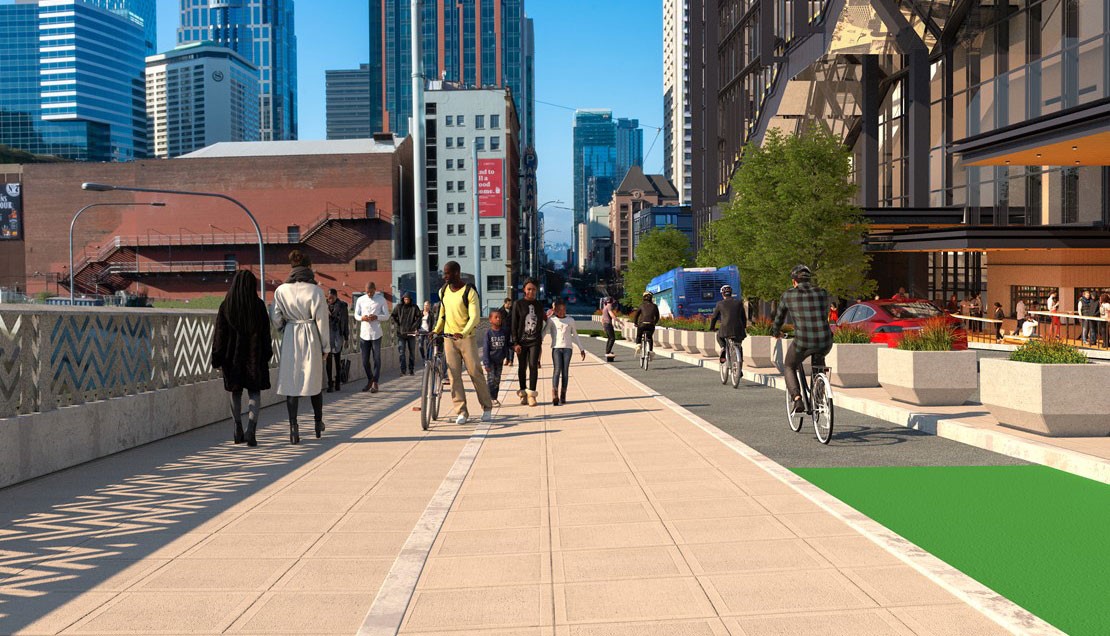 The bridge on Pine Street over I-5 will provide pedestrians and cyclists more space and a greater sense of separation from vehicles. This section of Pine will have a widened south sidewalk, a protected bike lane separated from traffic by a curbed buffer and planters, a higher pedestrian railing and integrated lighting, and painted crosswalk treatments at Boren Avenue. 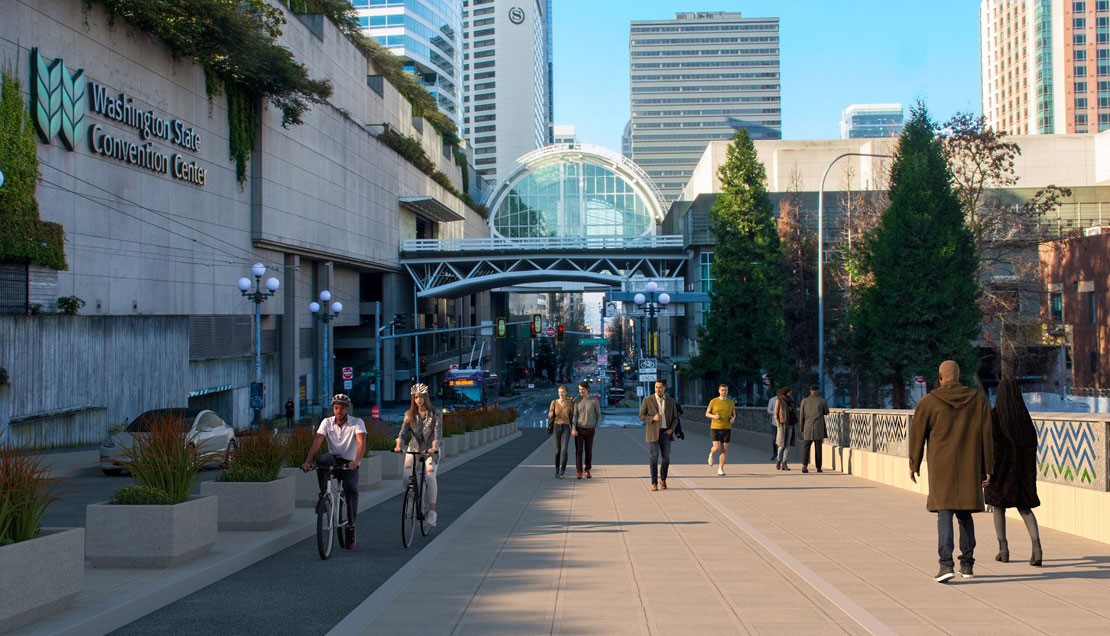 The Pike Street bridge will provide pedestrians and cyclists with more space and a greater sense of separation from I-5 below. The bridge will have a widened north sidewalk, a protected bike lane separated from traffic by a curbed buffer and planters, a higher pedestrian railing with integrated lighting, and new street trees between bridge limits and Boren Avenue. 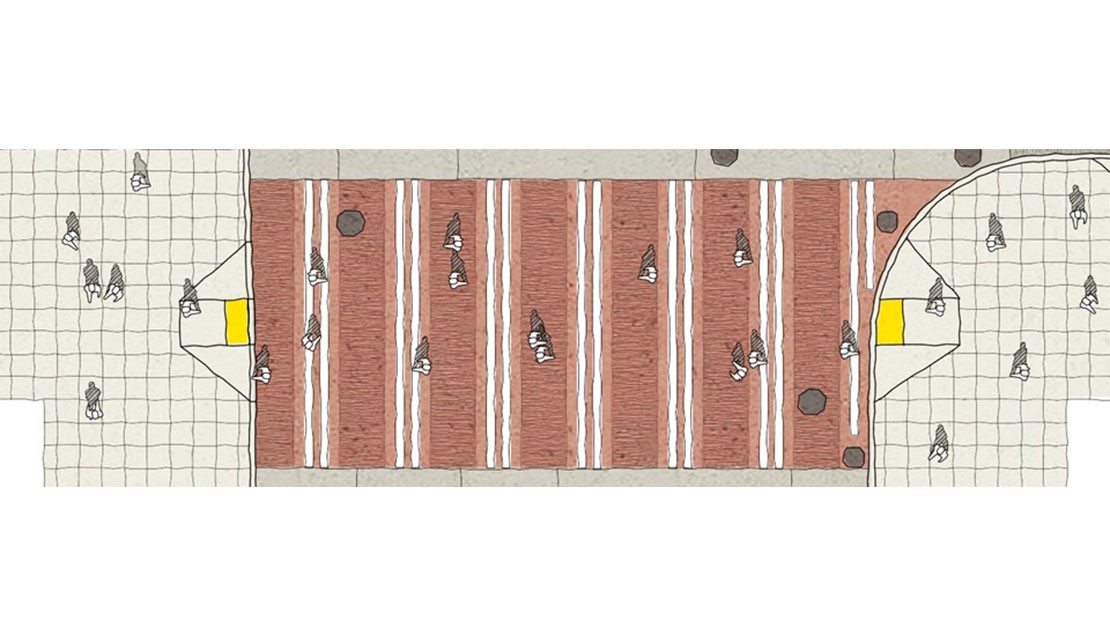 The crosswalks along the corridor are designed with alternative and contrasting colors that follow a color scheme similar to those in other areas of the corridor, like Westlake Park and 1st and Pike. This design will result in improved accessibility and visibility while creating a unique identity for Pike and Pine. 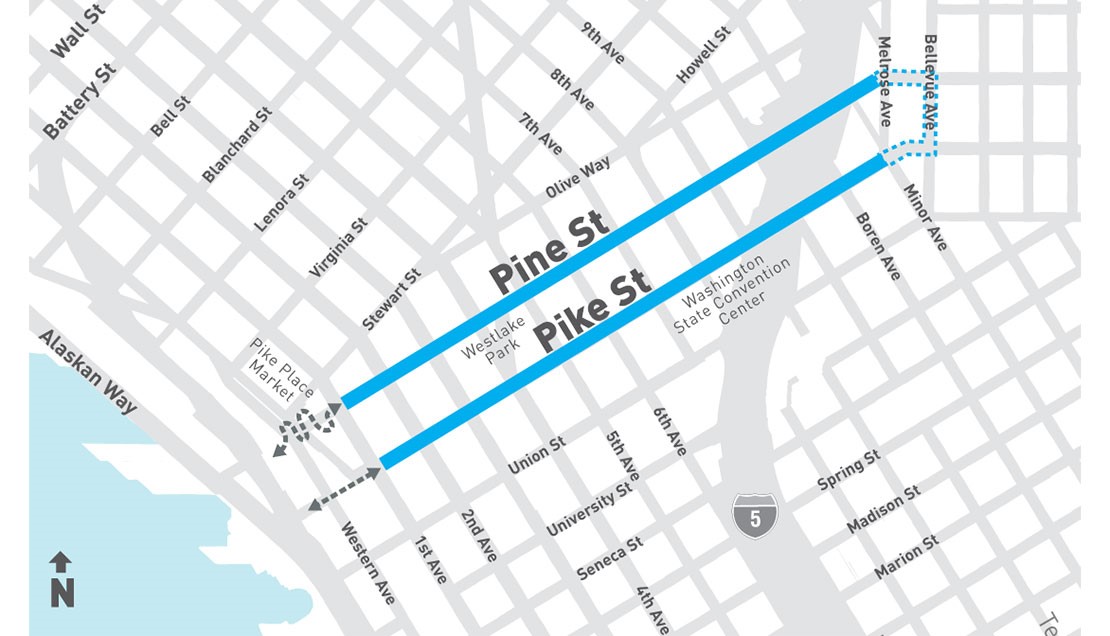 Pike Pine Streetscape and Bicycle Improvements will connect the waterfront and downtown core to Capitol Hill. One of the main changes will be to continue the one-way configuration of Pike and Pine east of 8th Avenue. Pike Street will be one-way eastbound, and Pine Street will be one-way westbound. In doing so, we can provide more room for pedestrians and cyclists, and a safe and more pleasant experience for all users.
Previous Next

Pike Pine Streetscape and Bicycle Improvements (a part of the Downtown Seattle Association’s Pike Pine Renaissance program) will provide a vibrant pedestrian experience on Pike and Pine streets between Capitol Hill and the Pike Place Market, with connections to the new waterfront. The City of Seattle’s Office of the Waterfront and Civic Projects is designing this project in coordination with the Downtown Seattle Association (DSA) and the Seattle Department of Transportation (SDOT) to improve east-west connections between the waterfront and surrounding neighborhoods.

The future Pike and Pine streets will be safe and comfortable for all users, with more visible crosswalks, wider sidewalks, more greenery, protected bike lanes and more seating and street activity. Pike and Pine will also have a more consistent character and identity from end to end.

We recommend you take a look at the renderings in the slider above for more detailed information about the 100 block of Pike, the 300 block of Pine and the Pike and Pine street bridges.

The project is anticipated to reach final design in March 2022. Construction is expected to begin in Fall 2022 and take approximately 18 months to complete.

Artists Derek Bruno and Gage Hamilton, working as a team, were selected as team artists for the Pike Pine Streetscape and Bicycle Improvements. In collaboration with the project team, they have developed a concept that will unify Pike and Pine streets, creating a legible path from Capitol Hill through the downtown retail core to Pike Place Market, a gateway to the waterfront. The artists will work to create a unifying identity for these streets and sited artwork through activate key locations along the route.