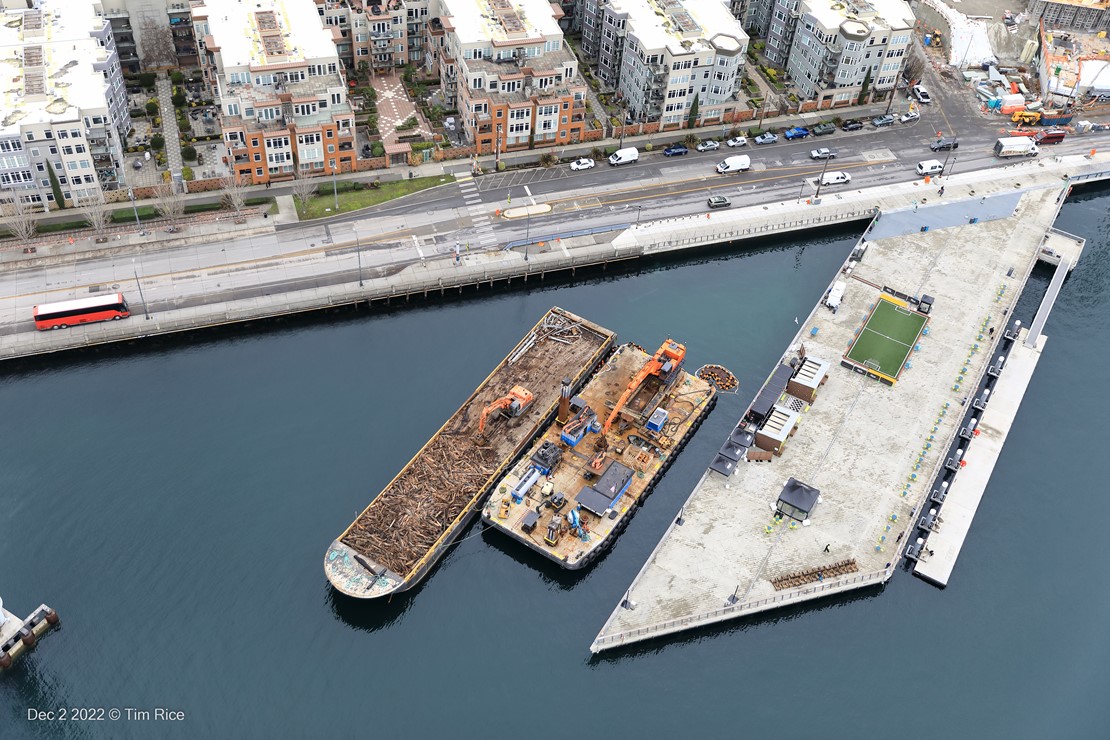 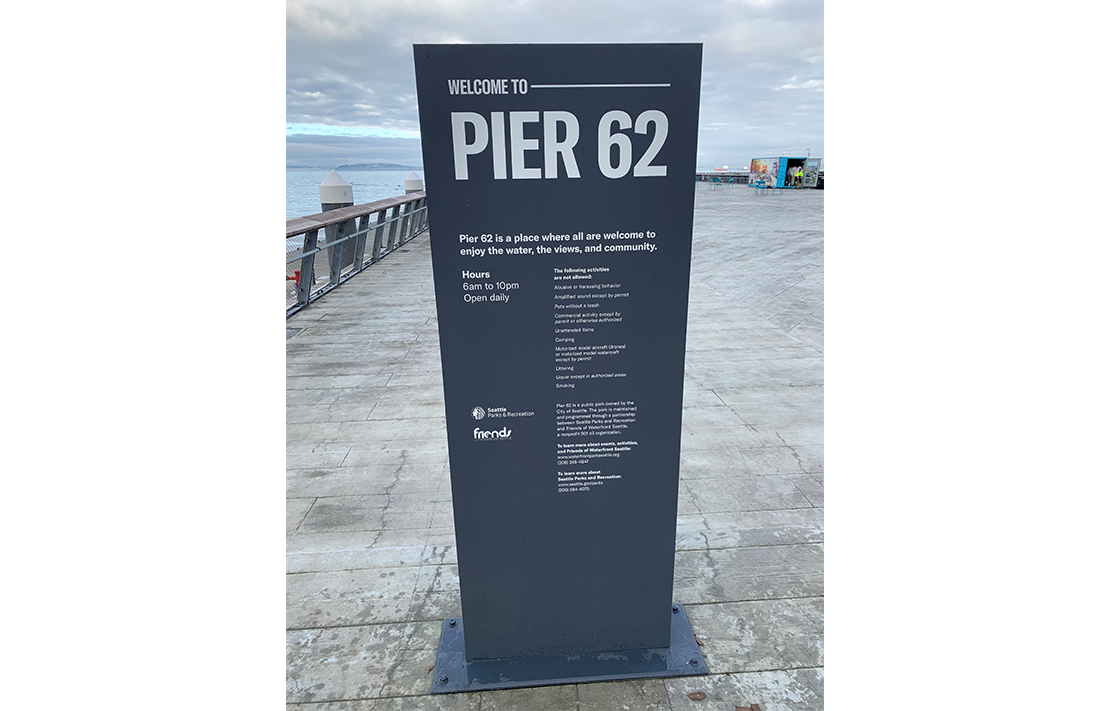 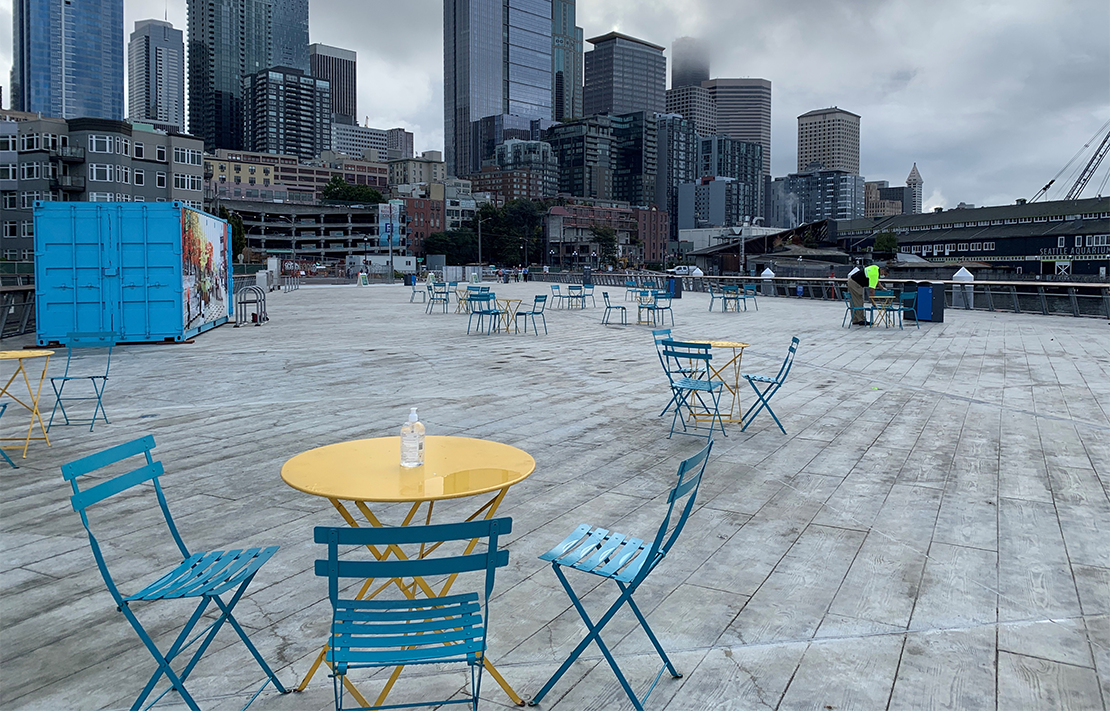 In partnership with Friends of Waterfront Seattle (Friends), we are pleased to share that the newly rebuilt public park, Pier 62, opened to the public on Sunday, September 20. Since December 2017, we replaced 884 aging wood piles with 175 steel piles and poured 214 new concrete deck panels. With that work now complete, the new Pier 62 provides approximately 40,000 square feet of new park space that will be used for a range of both passive and active recreation, arts and cultural activities. The space will be managed through a partnership with the Seattle Department of Parks and Recreation and Friends. Visit waterfrontparkseattle.org/pier-62/ for more information and future events at Pier 62. 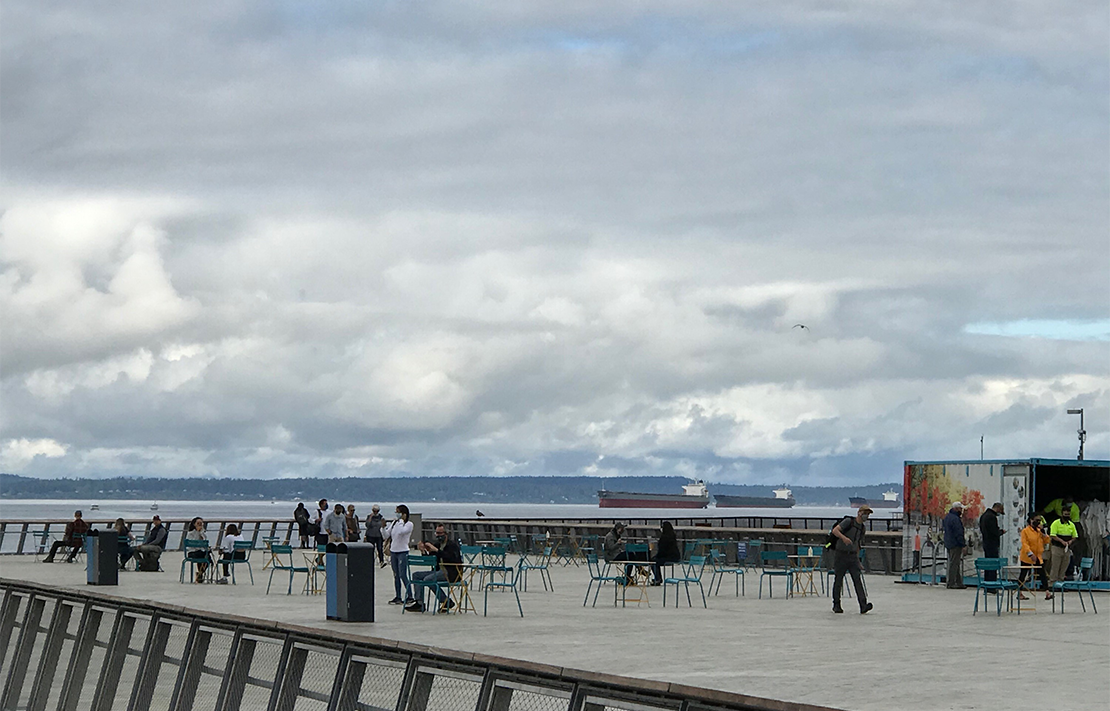 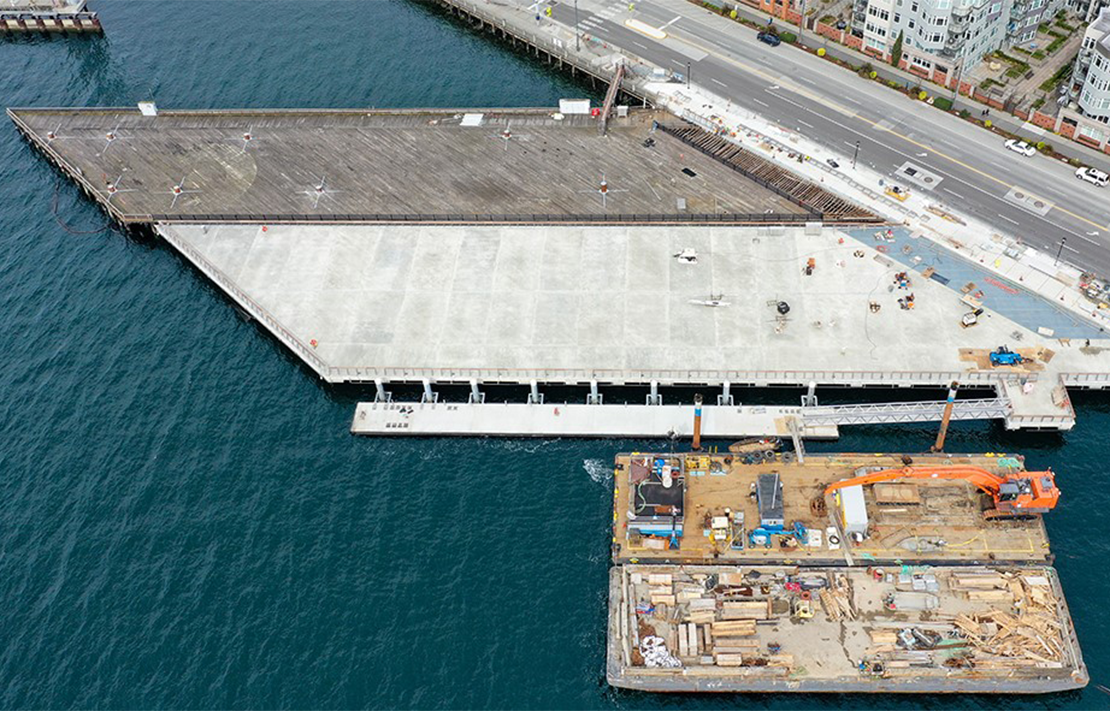 Pier 62 is now open! To know more about the new park and its upcoming events, visit the Friends of Waterfront Seattle’s website. They also provide flexible seating, park maintenance and temporary set commissions.

In June 2020, the City of Seattle completed the major construction elements of the rebuilt Pier 62.  Historically a pier where concerts and events had been held, the pier required infrastructure improvements to create a safer, more welcoming and more sustainable space. Replaced with 175 steel piles and poured with 214 new concrete deck panels, new Pier 62 provides nearly 40,000 square feet of park space.

The rebuilt pier was designed to be a flexible park with views of Elliott Bay, the Olympics and the Seattle skyline. A floating dock provides direct access to the water and includes art by artist Stephen Vitiello. New grating along the seawall increases light to the nearshore salmon habitat below. The rebuilt pier also includes new handrails and embedded LED lighting.

The City has removed Pier 63 to continue improving nearshore habitat for salmon and other marine life. Work took place in Fall 2022 and included removing nearly 50,000 square feet of decking and 894 timber piles that were casting a shadow over the marine habitat below.

Stephen Vitiello was commissioned to build Land Buoy Bells, a site-specific, environmentally driven sound installation on the floating dock at Pier 62. The work began development in 2013, when aspects of Waterfront Seattle were still in planning stages. The project went through location and concept changes but a constant was the idea to create a work that is performed by the environment, allowing for random patterns and rhythms to occur based on any given moment, producing an ongoing, ever-changing composition.

Land Buoy Bells uses industrial materials – steel tank ends - and transforms them into a set of 5 instruments. The bell-like objects are struck at various moments as energy is stored up in an engineered device driven by the rise and fall of the waters that encompass the floating dock.

Stephen Vitiello would like to acknowledge the project team of Fabrication Specialties, Ltd. and Stuart Kendall, Engineer. He also extends thank yous to Mutuus Studios (Kristen and Saul Becker) and Eric Fredericksen.

How we built Pier 62

Construction to rebuild Pier 62 began in December 2017 and was completed in June 2020. Watch the video of early construction, a timelapse video showing construction through its completion and click through the slider below to learn more about the construction process! 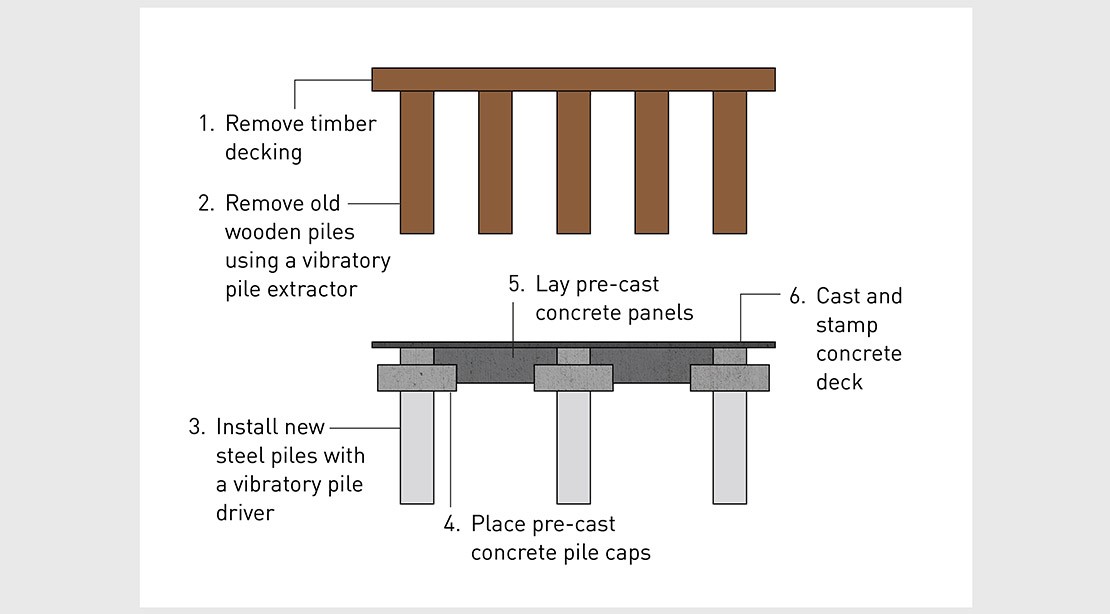 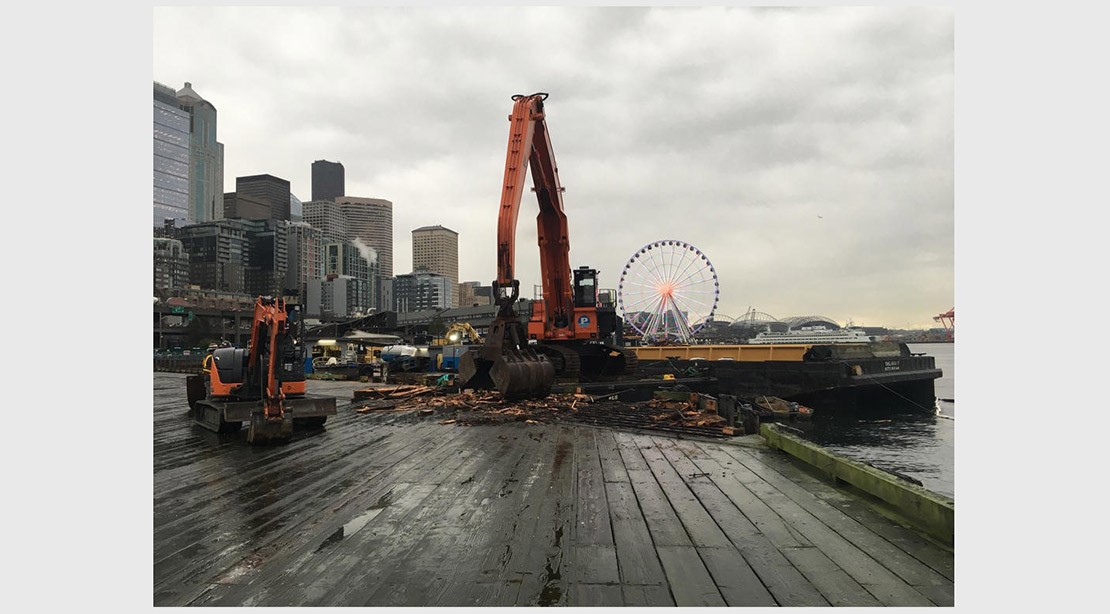 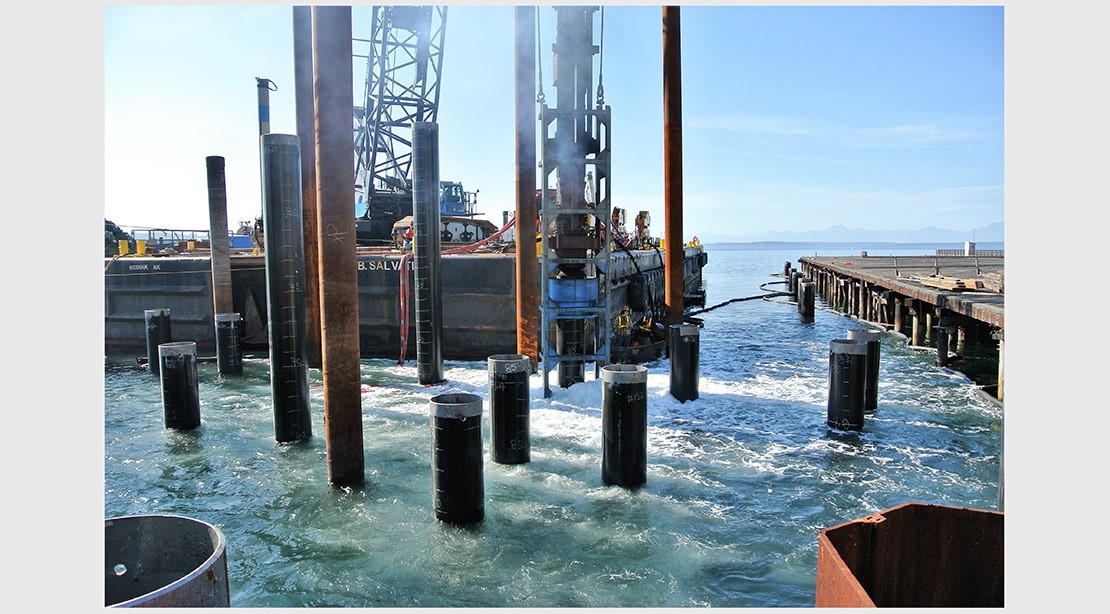 A vibratory pile extractor was used to remove the decaying old wooden piles from Pier 62 and parts of Pier 63. Watch this time-lapse video to see this process 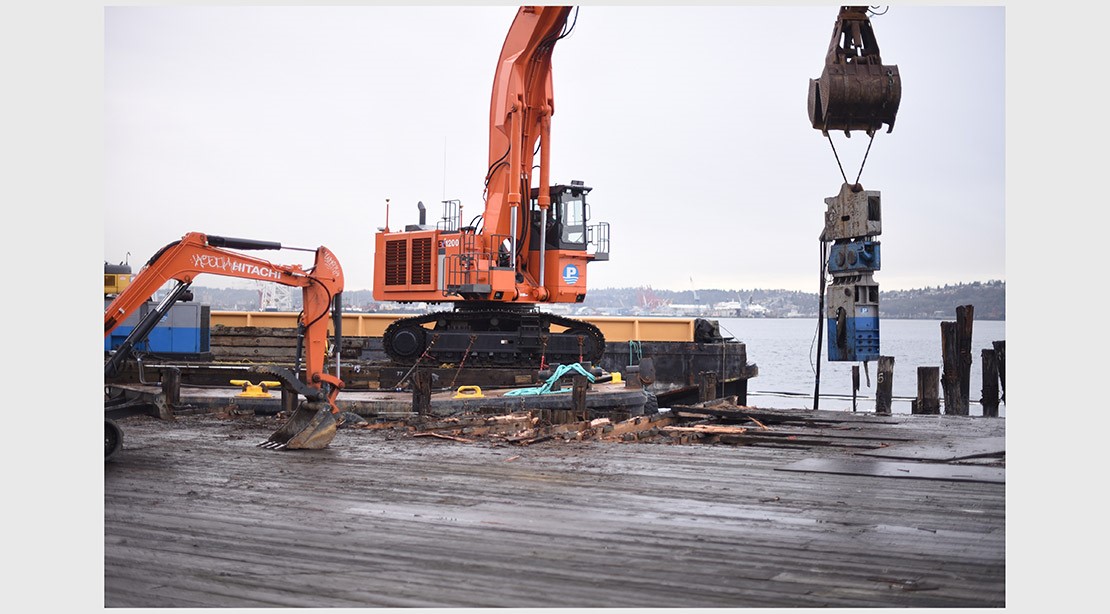 Once the fish window reopened, the barges were back to start installation of new steel piles with a vibratory pile driver 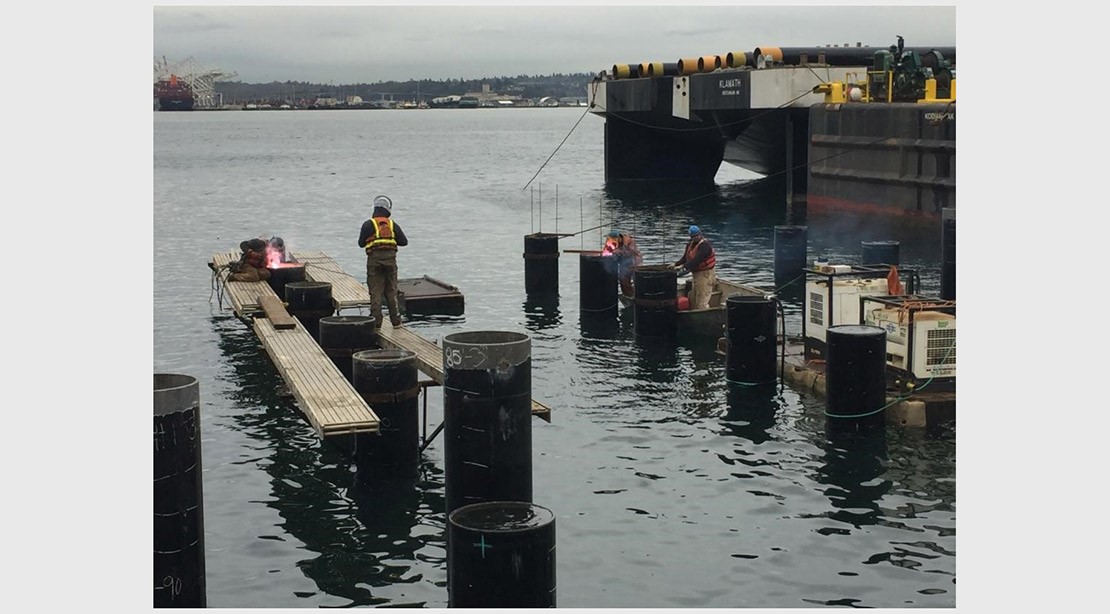 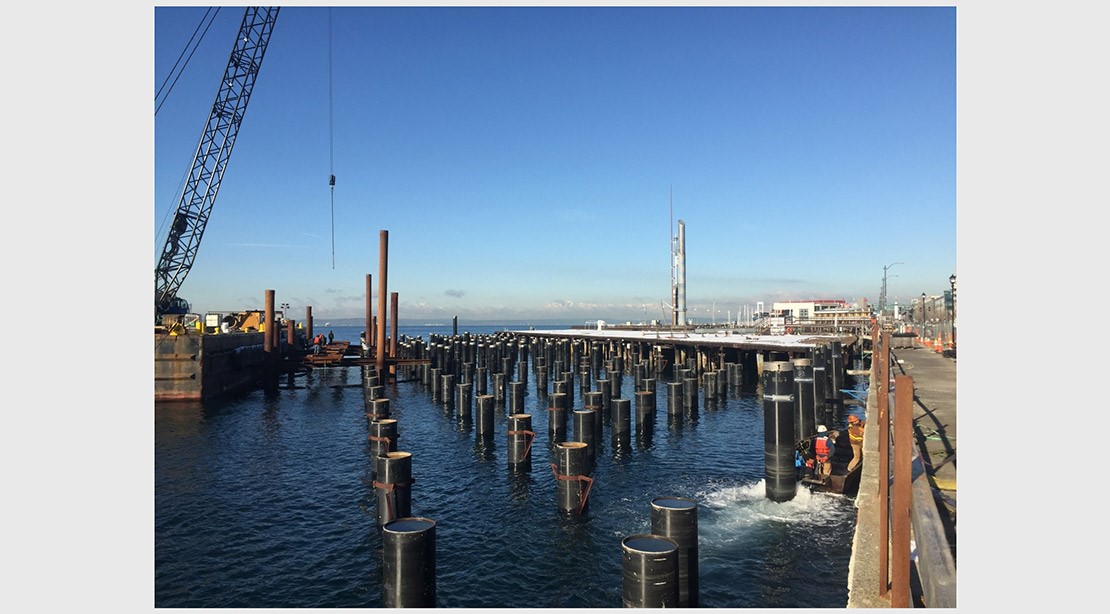 The 884 aging wood piles were replaced with 175 steel piles, which improves the structural safety of the pier and the marine habitat below 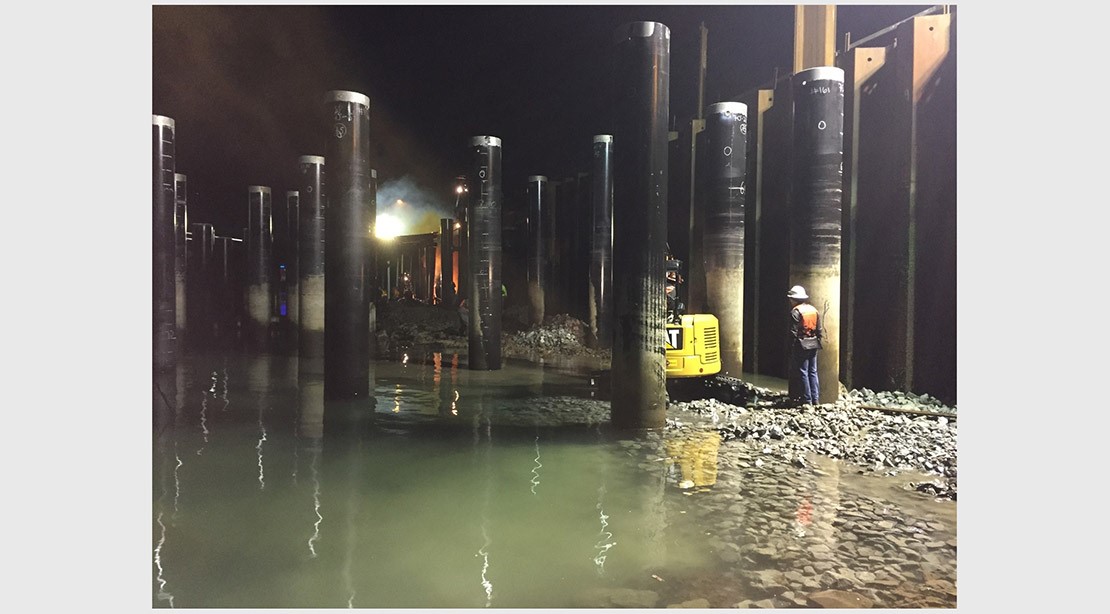 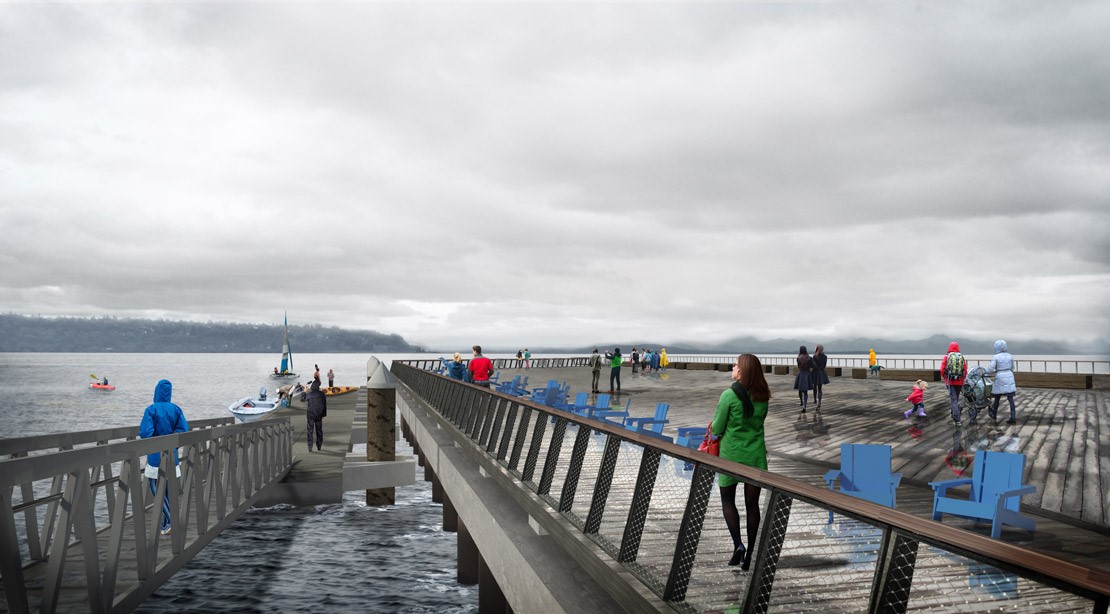 Lastly, the textured concrete deck is stamped on to the new foundation. Final touches include installation of a new railing, building a floating dock for public use, adding utilities to support events, and embedding solar-powered LED lighting in the deck. Deck work has not yet begun. Pier 62 was one of the first elements of the Waterfront Seattle Program open to the public
Previous Next